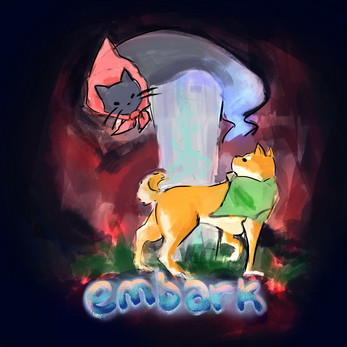 Embark is a game I worked on for my Independent Senior Project. I worked with Georgia Liu, who did all of the beautiful artwork in the game. I did all of the coding and sound design. We worked really hard, and I'm really proud of what we made!

At my high school (and many like it), seniors are allowed to skip their last month or so of classes to work on an approved independent project. They can work in small teams to accomplish some proposed goal, and show off their results before graduation at our ISP (Independent Senior Project) fair. Georgia and I had been talking about making a game for our ISP since freshman year. When senior year rolled around, after a stressful college admission process, we pulled the trigger.

I decided to program the game in the Godot engine, an open source game engine with a scripting language, gdscript, that was very similar to Python, which I was pretty up to date with at that point, because I had been tutoring some kids in Python on the side during the school year. To prepare for the project (and not just because of senioritis, I swear), we played a lot of different games to get some sense of what games we both liked and wanted to make. We ended up taking a lot of interest from Ori and the Blind Forest and Okami. We really liked how each new ability you unlocked in Ori let you traverse the space around you in new ways, and the ethereal, spiritual vibe from both games.

One thing I learned from this project is that no matter how much planning you do, there’s always something you overlook, especially with a first project. By the first week, we thought we had everything planned out, starting a work journal and making sure we had set assignments for each day. We made a good amount of progress the first week too; I had programmed all of the player movement, and Georgia had finished the player spritesheet and some of the environment and enemies. However, we ended up making much less progress than we had hoped in the second week due to AP exams, and as we approached the end of the project, we realized that there were certain little features that we wanted to add and little errors we wanted to fix; these “little” things piled up into a lot of work, leading into another big lesson for us: the last quarter of a project will take pretty much as much effort as the first three quarters. Things you didn’t plan for will pop up, you’ll be pressed for time, and overall, the last stretch is definitely the hardest.

I think working on this project for my last month of senior year was really rewarding. I remember the glee Georgia and I felt when we saw our character move in the game, how proud we were when people told us how fun it was to just move around, and the satisfaction of seeing people actually play our game from front to back.